SimpliSafe is growing into one of the most popular DIY home security companies in America, with more than 3 million customers. This Boston-based company isn’t your grandpa’s home security system. It offers flexibility and simple setup without all the high fees of traditional companies.

SimpliSafe cameras are high-quality and get the job done, but there aren’t many choices. For example, there isn’t actually a SimpliSafe outdoor camera. The company just started offering an outdoor outfit for its indoor camera. Nonetheless, SimpliSafe is a solid choice for homeowners and renters alike thanks to lack of monthly fees and contracts.

SimpliSafe cameras have motion sensors that can tell the difference between a human and a pet, which can cut down on false alarms either inside or outside the home.

There really isn’t any risk when you give SimpliSafe cameras a try, because you can return them within 60 days of purchase if you don’t like the system.

If you decide to go with SimpliSafe, you’ll only get to choose from two cameras. One is the SimpliCam, and the other is the Video Doorbell Pro. If you want a wide range of choices from bullet cams to floodlight cams, SimpliSafe won’t be your top choice.

The SimpliSafe outdoor camera is just the SimpliCam fitted with a separate outdoor cover to protect it from the elements.

No pan, tilt or zoom

What you see is what you get with SimpliSafe cameras. You won’t be able to pan, tilt or zoom if you want to get a better look at something because the cameras aren’t built with those features. However, the video doorbell has a tilt and zoom option.

Here are some of the features SimpliSafe offers that stood out to our SecurityNerd.

One of the huge reasons why SimpliSafe cameras are so popular is because of their easy installation. When setting up the system in general, it’s literally plug and play. Plug it in, download the app and simply follow instructions on your phone. You pair the device with Wi-Fi and you’re good to go. It’s also worth noting SimpliSafe has great customer service and many online help forums if you get stuck.

The SimpliSafe doorbell isn’t difficult to install, but it definitely takes more DIY know-how than the SimpliCam. First, make sure you have an existing non-digital doorbell before buying this item. All you need in addition is a Wi-Fi connection and a Phillips head screwdriver.

After removing your current doorbell, take the existing doorbell’s wires and thread them through the mounting bracket that comes in the box. There’s also a wedge SimpliSafe provides if you’re looking to install on brick, but that will also require a power drill. Pair the doorbell with your Wi-Fi with help from the app, and you’re done. It takes about a half an hour to get done according to many users.

This is SimpliSafe’s main camera that can also turn into a SimpliSafe outdoor camera with the addition of an outdoor outfit. Enjoy all the features above, and add in an array of home security tools to allow for home automation and a full-scale security system.

This doorbell camera provides a wide-angle view of your yard and alerts you even if no one rings the doorbell. You’ll be able to see who’s at your door and also communicate with them thanks to two-way audio. This camera can also tell the difference between people and objects, and you can tell the camera to ignore cars as well. It includes a door chime and works seamlessly with all other SimpliSafe products. Check out our full review of the SimpliSafe video doorbell. 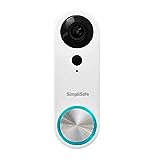 If you’re looking to create your own smart home ecosystem, SimpliSafe can help with that. SimpliSafe is compatible with the following third-party systems:

Check out our full review of the SimpliSafe security system.

With features like smart motion detection and a highly rated app, investing in SimpliSafe cameras will keep your home safe without taking a huge chunk out of your monthly budget. SimpliSafe doesn’t require customers to sign lengthy contracts or buy into expensive monthly plans. Perhaps best of all, you can return your system after 60 days if you’re not happy, so there’s no real risk to giving it a try.

SimpliSafe is Available at Amazon

Erin Maloney
Erin is a freelance video producer and writer based out of Florida. She works with major retail companies and digital startups as a brand storyteller. When Erin's not writing, you can catch her scuba diving and spending time with her dog (not at the same time).